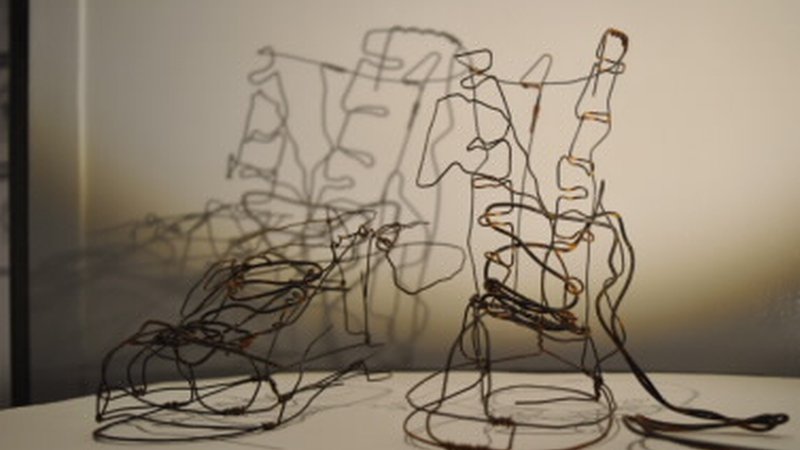 The young artist Andrey Hambarski creates an impressive visual platform for flight of the imagination with his new exhibition It could be Them, which was opened last night at the UniCredit Studio Gallery of Modern Art.

The exhibition features some of the most famous paintings of Van Gogh, Salvador Dali, Leonardo da Vinci, Titian and others, but made of wire. The visitors can see the wire reproductions of Van Gogh's Starry Night next to Titian's Venus of Urbino and Munch's Scream. Except for the paintings of world famous painters, Andrey Hambarski presents also wire portraits of emblematic figures like Radoy Ralin, Georgi Minchev, Marilyn Monroe and Elvis Presley. The visitors can finish the images for themselves through imaginative play with the wire shadows that they cast under the light of a torch or even a mobile phone.

"Thanks to wire the graphics become three-dimensional. I want to give freedom to the viewers and their imagination – to enable them to play with the image and to complete it in a way meaningful to the viewers themselves," Andrey Hambarski commented. To him the idea of the wire reproductions is to reveal new aspects of something well known. To provoke the viewer to rediscover famous works of art, to paint and finish them on their own. A curious fact is that the portraits are made of a single piece of wire – end-to-end, without interruption.

"Whenever I visit an exhibition at UniCredit Studio, I am pleasantly surprised by the fantasy and skills of the artists presented there. We invest in this art space in the heart of Sofia in order to present to the public promising young talents. An exhibition at UniCredit Studio is a kind of a springboard for greater future success, which other artists we have worked with achieve, and now, I believe, this will be the case for Andrey, too.“, commented at the opening Andrea Casini, General Manager and Deputy Chair of the Management Board of UniCredit Bulbank.

Special guest of the evening was the Bulgarian actress, singer and producer Desi Tenekedzhieva, Chair of Stoyan Kambarev Foundation.

Andrey Hambarski was born in 1985. He graduated from the National School of Applied Arts "Saint Luca", Sofia, and then obtained a degree in Photography from Veliko Tarnovo University and a degree in Puppet Theatre Scenography from the National Academy for Theatre and Film Arts in the class of Maya Petrova. He has worked as a restorer of old furniture, puppet designer in the Sofia Puppet Theatre and a scenographer in a project for children's series. Currently he is a freelance painter and scnographer.

In 2015 he was nominated for the Flight in Art award of Stoyan Kambarev Foundation and won the special award of UniCredit Bulbank in the prestigious art selection.

The exhibition It could be Them by Andrey Hambarski at UniCredit Studio may be seen by the end of March.

UniCredit Bulbank follows a dedicated programme supporting valuable projects in the field of culture. UniCredit Studio was opened in January 2012 and since then it has given opportunity for expression to many young authors and has presented interesting exhibitions.