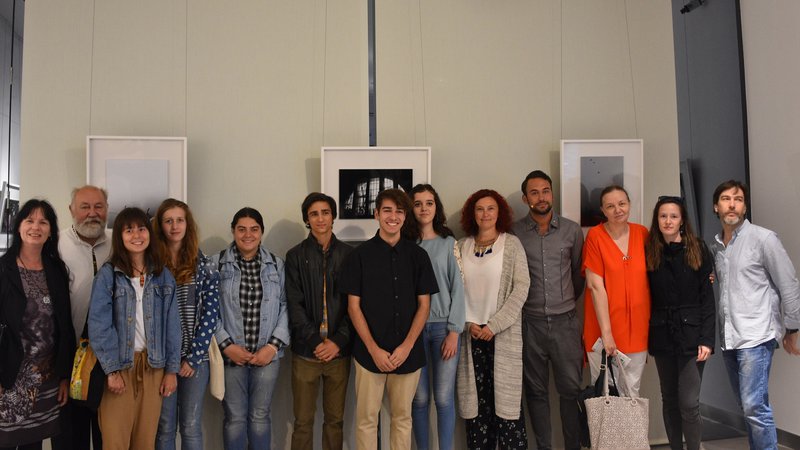 The students who won the prestigious awards at the 19th annual photography contest Photoakademika 2018 presented their works in UniCredit Studio. The contest is held under the auspices of the Ministry of Culture and Bulgarian Photography Academy Janka Kjurkchieva. The exhibit is part of the culture and art programme of the European Month of Photography. The long-standing official bank of the European Month of Photography is UniCredit Bulbank. The exhibit can be seen at UniCredit Studio (7 Sveta Nedelya Sq., Sofia) until July 21.

During the opening the winners were personally congratulated by the General Manager of UniCredit Bulbank Enrico Minniti.

“It makes me very happy that UniCredit Studio has the opportunity to welcome these young talented artists in the renovated gallery,’’ said Minniti and added:

‘’As a banker, numbers come first for me, so when they tried to explain to me the concept behind the Unicredit Bulbank gallery for contemporary art, I asked them to show me the numbers first. In that instance, however, I wasn’t referring to costs and revenues, but to the number of exhibits and guests, which the studio would host. My colleagues quickly convinced me that we would be doing something incredible for the young artists,’’ the General Manager of the Bank explained.

The young artists also received congratulations for a job well-done from Yuri Treyman, who is one of the founders of the photography academy.

‘’Photoakademika is the first contest organized by the Photography Academy, dating back to the Academy’s foundation. I am very happy that UniCredit Studio decided to present the winners of precisely this contest, because this is a contest created for really young artists, 18 years old or younger. What’s more, the photographs of the winners were used to make up a collection of Bulgarian works, presented at the 39th Biennial of Youth Photography, held under the auspices of Fédération Internationale de l'Art Photographique, where we won second place. A major accolade, which Bulgaria had heretofore never received.

All those who won the contest are students of the National Professional School for Polygraphy and Photography.

The exhibit can be seen at UniCredit Studio (7 Sveta Nedelya Sq., Sofia) until July 21. The Gallery is opened every weekday from 10 AM to 18 PM and on Saturday from 11 AM to 17 PM.

The UniCredit Studio Gallery of Contemporary Art was founded in 2012 when Bulgaria was selected from among more than 20 European countries to host the first UniCredit Studio after the one that was created in Italy. It serves as a contemporary art platform, its mission being to present the art of young Bulgarian and international artists.

Since then the gallery has hosted exhibitions of young and talented Bulgarian artists like Andrey Hambarski, Ivaylo Hristov, Ognyana Serafimova, Velizar Dimchev, etc.

In 2016 the gallery hosted the world-famous exhibition Living On A Dollar A Day: The Lives and Faces of the World’s Poor by Renée C. Byer, a photojournalist and Pulitzer prize winner.

The gallery has facilitated momentous photography events such as Fotofabrika Festival, Photography Month, etc. As of the beginning of 2017 UniCredit Studio has a new home in the renovated ground floor of UniCredit Bulbank located on Sveta Nedelya Square right in the center of Sofia.

Photoakademika is the first photography contest organized by Photography Academy and has been held regularly since the Academy was founded. It has always been comprised of two segments: For young people who are 18 years old or younger and for everyone else.

The segment for young people is the only photography contest in the country for budding photographers.  After the prizes (annual grants) provided by the Ministry of Culture were established, the interest towards the contest began to grow.

This year around 70 young people participated in the contest. Nine of them won the prestigious award. What’s more, their works made up the Bulgarian collection, which earned Bulgaria a silver medal at the 39th Biennial for Youth Photography under the auspices of FIAP.