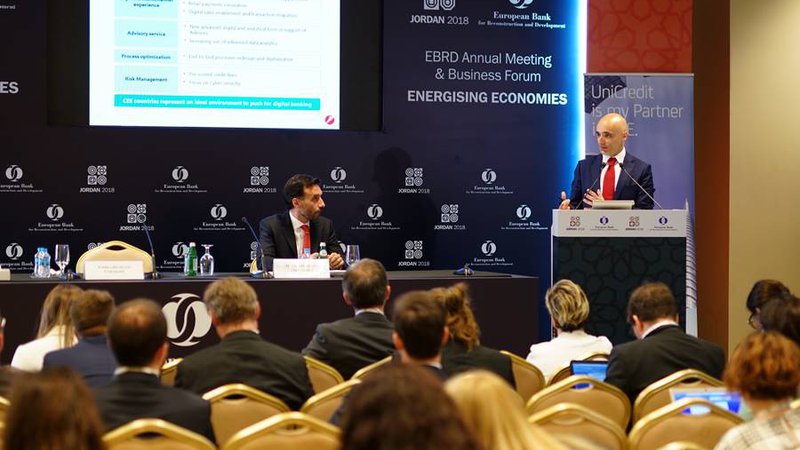 On a global scale 2018 is shaping up to be the ninth consecutive year in which the growth of the global economy will be 3.5% or more. The last time this happened was in the 60s during the 20th century. The expansion which we observe in the US is the second in terms of duration in the history of the country. At the same time, the economic growth in the Eurozone maintains good levels and is spreading to all countries.  CEE economies are enjoying the fastest rate of growth after the crisis. The average annual GDP growth of the countries from the region is an average of 3.7% for 2017 and 4.6% if the results of Turkey and Russia are subtracted.

UniCredit expects the economic expansion in Central and Eastern Europe to be sustainable. During this year the average GDP growth for the countries from the region will be 2.8% with some cyclical slowdown in certain economies. Bulgaria, however, is among the countries for which the best results for the economy are yet to come.  UniCredit Analysts show that the country, along with Hungary, Slovenia, Romania, Turkey and Slovakia will exceed 4% annual growth that is expected to be driven mainly by consumption.

A suitable moment for the expansion of lending

In CEE the banking sector has a more stable and sustainable position in comparison to previous years not only in terms of the credit portfolio increase  rate but also in terms of its quality.

This positive trend in lending will continue, especially in CEE (excluding Russia and Turkey). In the course of three consecutive years in the period from 2017–2019 it will grow by 5% annually after the slight slowdown reported from 2012 to 2016.

In 2018 lending will increase in proportion to the growth in the total amount of deposits in the same region (Central and Eastern Europe, excluding Turkey and Russia), giving grounds for the optimistic outlook that the region will shift the focus from savings to investments.

Following the logic of the economy, UniCredit analysts predict that the growth in lending in these countries will slow down, while picking up speed in countries such as Croatia and Serbia, which up till now have fallen behind on this indicator.

As early as 2011 the ratio of loans to deposits quickly fell under 100% for the banking system of Central and Eastern Europe (with the exception of Turkey and Slovakia). This means that the banks in the region do not rely on external financing, not to mention the fact that currently there is a high percentage of short-term deposits both corporate and household. These funds can be utilized when new opportunities arise.

As far as the quality of loans is concerned, the economic expansion over the last years, together with the sale of non-performing loans, has led to the improvement of their percentage in the total portfolio.

All Central and Eastern European countries have reached non-performing loan levels lower than 9%, with the exception of Russia.  Since 2015 the percentage of non-performing loans in Bulgaria has decreased two times, currently reaching up to 7.7%.

Digitalization and FinTech companies in Central and Eastern Europe

The countries from the region are well prepared for the digital future.

Digital Infrastructure – the usage of Internet and mobile technologies in CEE countries is at the same level as that of the Western countries. The usage of mobile services exceeds 100% (more than one subscription per person), while penetration exceeds 60% for Internet services.

The demographic tendencies of the region also promote the penetration of digital technologies.  Younger generations which are frequently referred to as millennials and generation Z constitute around 50% of the population of Central and Eastern Europe.  In comparison, the people who are under 35 years of age in Western Europe constitute 40%.

The FinTech industry in Central and Eastern Europe has flourished in the last years.

This year UniCredit conducted the first analysis of the FinTech companies in Central and Eastern Europe of that kind. It showed that the five years, from 2012 to 2016, were especially strong years in terms of foundation of new companies.  According to data from Tracxn, Central and Eastern Europe is currently the home of more than 600 FinTech companies. More than half of them operate in the sphere of transactions and payments or financing, while 12% are engaged in investments and asset management (trading platforms, personal finance analysis, etc.)

The remainder of the companies cover a wide array of activities, including cryptocurrencies, expenditure tracking, insurance, risk management and fraud prevention.

Russia has the largest share of FinTech companies in Central and Eastern Europe, followed by Turkey, Bulgaria, the Czech Republic and Romania.  The company which received the most significant financing amounting to 25 Million EUR operates in Bulgaria. The company operates in the sphere of risk management.

“The foundations of macroeconomics and the banking sector are very solid at present in the countries from Central and Eastern Europe thanks to the good global environment as well.  Good mobile and online services penetration, the demographic tendencies and the quick development of digital services have turned the region into a favourable environment for making the most out of digital banking and its incorporation in the traditional macro and banking analysis,’’ said Matteo Ferrazzi, CEE Strategic and Corporate Forecasts coordinator.

UniCredit in Central and Eastern Europe: How digitalization develops

The CEE region is the ideal testing ground for the new digital and IT solutions due to the fact that the region quickly adopts innovative ideas.

Digital technologies are utilized by UniCredit with the aim of improving customer experience via the utilization of different banking channels in different points of interaction.

The digitalization of processes also helps to increase the quality of the personal contact between bankers and clients and the consultation services they provide.

Digital project investments made by UniCredit Group in Central and Eastern Europe aim to increase customer satisfaction by optimizing processes.

The Group reported a strong growth in the number of clients using digital services in the region thanks to the different programmes and platforms that put an emphasis on innovation and digitalization.

‘’UniCredit has been ranked first in Central and Eastern Europe. The banks from the Group are in the top five in most CEE countries,’’ said Carlo Vivaldi, Head of CEE division, UniCredit.  “Our goal is further consolidation of our solid first-ranking position in the region through organic growth of revenues and our client base.  This will be achieved principally through digital technology and innovations as well as a more effective risk and expenditure management.”

“CEE countries are the ideal environment for digital banking development. Digitalization, of course, is nothing new, but we are certain that we must look at it from the viewpoint of Central and Eastern Europe so that its full potential can be unlocked, especially in the banking sector.  Our unique branch network in the region is an excellent opportunity to combine the existing financial and market environment in CEE countries with a fully-developed digital banking,” said Andrea Diamanti, Head of CEE Corporate and Investment Banking, UniCredit.

UniCredit is a successful Pan-European commercial bank with a simple structure which provides a unique network in Western, Central and Eastern Europe to its considerable and strong client base consisting of 25 million clients.

UniCredit offers local expertise and international coverage. It assists its clients on a global scale by providing them with an unparalleled access to the leading banks of its 14 main markets as well as to another 18 countries all over the world.  The European banking network of UniCredit covers Italy, Germany, Austria, Bosnia and Herzegovina, Bulgaria, Croatia, the Czech Republic, Hungary, Romania, Russia, Slovakia, Slovenia, Serbia and Turkey.

About the Corporate and Investment Banking of UniCredit

The corporate and investment banking of UniCredit services 1500 multinational corporate clients and key financial institutions. It assists the corporate banking units of the Group in providing services to 600 000 clients from the corporate and public sector.  Its international network covers 16 countries worldwide. Moreover, we also provide access to a network of 4000 correspondent banks in 175 countries.