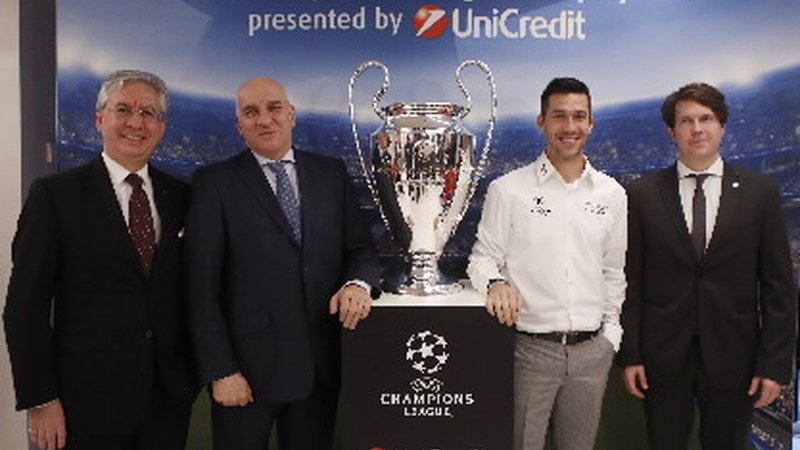 UniCredit Bulbank has welcomed the UEFA Champions League Trophy in Sofia. Fans can take their photo with the most prestigious football trophy on December 10th and 11th at popular venues in the Bulgarian capital: Prince Alexander I Square and Paradise Center.

Luis Garcia is a legendary attacking midfielder, having played for Barcelona, Atletico (Madrid) and Liverpool in his career. Fans can meet him during the official opening of UEFA Champions League Trophy Tour in Bulgaria on December 10th, 12:30 h at Prince Alexander I Square. They will have this opportunity on the next day as well, December 11th in Paradise Center, 11:00 h.

Over the next couple of days, fans in Sofia have the unique opportunity to get close to the greatness of UEFA Champions League Trophy, presented by UniCredit:

This year, for the first time ever, an attractive-looking truck was built, especially for the needs of UEFA Champions League Trophy Tour. It can be deployed to a spectacular 200 sq. m. construction. The trophy will be displayed on an open balcony offering the greatest level of visibility for passers-by and excellent photo opportunities.

Fan activities include taking a photo with the Trophy, interactive games and a rich exhibition of memorabilia, signed by some of the greatest football legends. Fans of the most famous sports game in the world can enjoy a lot more football accessories of legends, all of whom have played in UEFA Champions League. Some of them are Cristiano Ronaldo, Iker Casillas, Lionel Messi, David Beckham and Javier Zanetti.

The UEFA Champions League Trophy Tour began on November 20th in Prague, Czech Republic. Afterwards it went through Liberec, Plzen and Trnava (Slovakia). Bulgaria has the honour of hosting this year’s final of the European tour.

After visiting Sofia, the UEFA Champions League Trophy will continue its Tour towards Burgas and Varna.

The UEFA Champions League Trophy Tour has become a great asset for UniCredit to engage with fans over the years. Until this year, the Tour has visited 68 different cities in a total of 14 countries across Europe, allowing us to welcome more than 560,000 fans who took over 170,000 pictures with the iconic trophy.

During its last two visits in Bulgaria, 2009 and 2013, the UEFA Champions League Trophy achieved great success. Previous tours brought a lot of emotions for a lot of people: at least 4 couples chose to make a visit to the Trophy on the day of their weddings arriving to the public event with the whole wedding party. They chose this as a symbol for this important day in their lives. Many people brought their children to see the legend, while a young father made a visit to the trophy the first outing of his son ever – a child of exactly 40 days (a tradition in Bulgaria is people to not take out new-borns until 40 days old, still practiced in many families). People in disadvantaged position also travelled from all over Bulgaria to be with their beloved Trophy. They were always accommodated with respect.

A new role for a stronger partnership