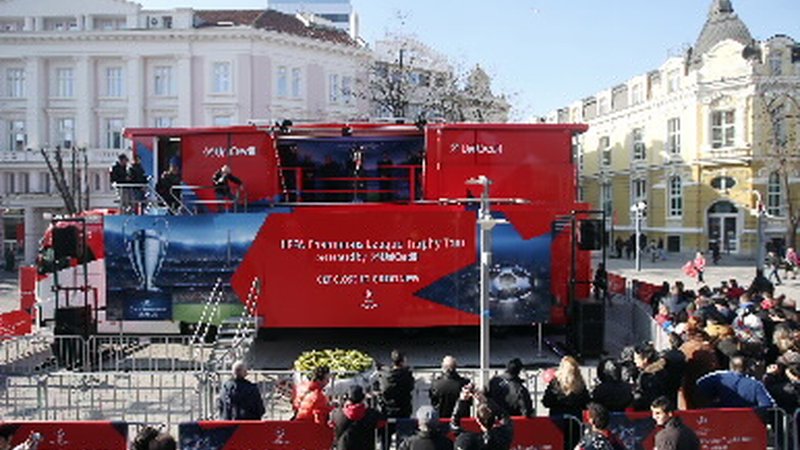 UEFA Champions League Trophy can be seen live in Burgas for the first time in the history of the precious trophy. This is now possible after the seaside city was included in the Trophy Tour in Europe, presented by UniCredit.

Fans can have their picture with Trophy on December 14th and 15th in front of the branch of UniCredit Bulbank in 22 Alexandrovska Street until 18:00 h and in Galeria Burgas Mall, Yanko Komitov Street, from 10:00 to 22:00 on December 15th.

Burgas is the second stop of the Trophy Tour in Bulgaria and from there it will continue its tour to Varna.

Special guests of the official opening in Burgas were the legendary football player Zlatko Yankov and the deputy mayor of Burgas who is in charge of sports Dr. Loris Manuelyan. Dr. Manuelyan addressed the residents and guests of the city with the wish one day a Burgas football team to take part in the finals of UEFA Champions League and to lift the Trophy. Zlatko Yankov, who has had the honour to play in matches of UEFA Champions League, expressed confidence that Bulgaria has many young talented football players and advised young people to do sports and to develop.

“We are here with the Trophy to confirm that we, the people of UniCredit, aim to be close to you, the people in Burgas, to be part of the positive emotions in your daily life and with maximum accurateness, ease and in a way invisible to you to work hard as your preferred financial partner.”, said at the opening the regional director of Retail Banking for Burgas Stefan Gotsin.

“It is an honour to Burgas Municipality and personally to the mayor Dimitar Nikolov to have supported us in organizing the Trophy Tour in Burgas and making it possible to present it to you here. This year Burgas was declared the city with the best sports infrastructure and I wish for local heroes competing for this and other coveted sports trophies.”, added the regional director of Corporate Banking for Burgas Georgi Dimov.

UniCredit Bulbank welcomed UEFA Champions League Trophy in Sofia on December 10th at one of the most iconic places in the capital city – Knyaz Alexander I Square where the Trophy was displayed in a truck specially created for it and filled with interactive games and a collection of football accessories.

UEFA Champions League Trophy started its tour on November 20th in Prague, Czech Republic. After that it travelled on through Liberec, Pilsen and Trnava (Slovakia). Bulgaria won the prestigious role to organize the final of the European tour this year.

UEFA Champions League Trophy Tour is an extremely important event for UniCredit and the football fans. Until this year, the Trophy has visited 14 European countries, 68 towns and cities to reach 560 000 fans, giving them the opportunity to have 170 000 pictures taken.

During its two visits to Bulgaria, in 2009 and 2013, UEFA Champions League Trophy Tour had a great success. The previous visits of the Trophy brought amazing emotions for many people: at least four couples visited the Trophy Tour on their wedding day together will all of their guests. Many visitors came with their children who felt the magic of the trophy. Following an old Bulgarian tradition a father took his 40-day old son on his first outing and chose to take him to the UEFA Champions League Trophy event. Disadvantaged people from every corner of Bulgaria travelled to see the greatness of the Trophy. Their needs have always been met with understanding and tolerance.