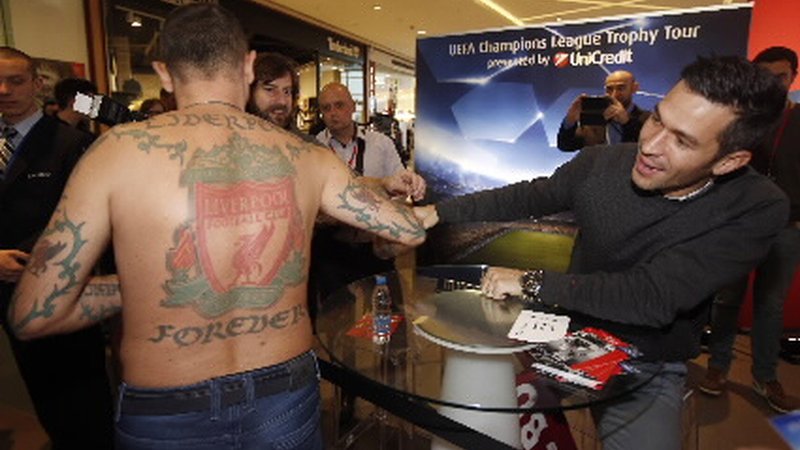 The football star is in Bulgaria until today at the invitation of UniCredit Bulbank; he is an Ambassador of UEFA Champions League Trophy Tour, presented by UniCredit.

The legendary Luis Garcia met with hundreds of fans at Paradise Center today. He is on a three-day visit to Bulgaria at the invitation of UniCredit Bulbank as an Ambassador of UEFA Champions League Trophy Tour, presented by UniCredit.

The footballer demonstrated high class and fascinated the fans with his positivism, approachability, good manners and finesse. During the Trophy Tour he spent with the fans more time than planned.

“The Bulgarian audience is great. I had lots of fun in Sofia. The special truck carrying the Trophy to your capital city and next week to Burgas offers a unique experience with the interactive games and the possibility to have a picture taken with the Trophy. I would like to thank UniCredit and the fans for their warm welcome”, said Luis Garcia.

Luis Garcia is a famous offensive midfielder. During his career he played for Barcelona, Atletico (Madrid) and Liverpool. In his official profiles on Twitter @LuchoGarcia14 and facebook one can see that he is still quite busy. In the last month, besides Sofia, he also travelled to Singapore, Qatar, Spain and Thailand. After Sofia, he will be flying to Uganda where he will take part in a charity football game.

After the visit in Sofia, which also continues today until 22:00 h in Paradise Center, UEFA Champions League Trophy will travel for the first time to Burgas and Varna:

UEFA Champions League Trophy Tour is an extremely important event for UniCredit and the football fans. Until this year the Trophy has visited 14 European countries, 68 towns and cities, to get to more than half a million fans.